Been spendin' most their lives*, livin' in the All Grain paradise 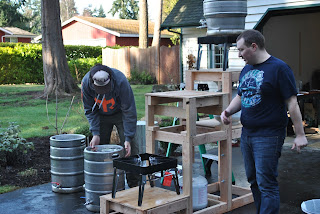 And lo the day hath arrived!

Grains were mashed, water and wort were heated, boiled and chilled and all and sundry was washed, rinsed and sanitized. 'Twas a great day, with many wild successes and few setbacks which in truth ended up being minor in nature and highly educational. We ended up feeling like things were intuitive enough and our errors largely avoidable in future. Lets be honest here though, we could have messed it up considerably and still probably made a decent beer. But who wants decent beer? I vote for exceptional beer every time. 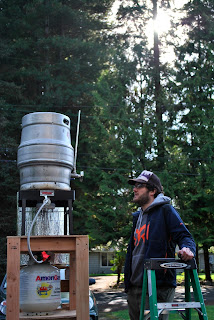 For starters we couldn't have asked for a better day in Edmonds, WA. It had been grey and rainy the whole week prior and driving north that morning things were looking a little misty from the Interstate. But the sun prevailed and everything had burned off by 10am. Being able to brew outside was great as using propane tanks the more air circulation we could get the better.  And the above timing provided the first lesson of the day - start early! After a 'quick' sit down to go over the schedule for the day and to get on the same page for the various upcoming tasks, we didn't really get going in earnest until about 11:30am. Things didn't seem too bad though, as we planned on a 6 hour brew day and with Winter receding here in the PNW we felt we had a decent buffer. Word to the wise - finishing up the boil and cleaning up in the dark isn't a deal breaker or even that challenging, its just ultimately better planning and easier on the brewers to get things done before sunset. So I'll be looking forward to some dawn brew days in future. That and maybe buying a flood-light...

Now for my second rave of this posting: Beersmith homebrew software. This software really has it all, from extravagantly thorough ingredient databases to equipment style and temperature adjustments to water profiles and all manner of conversion and color, bitterness and gravity adjustment tools. I started a trial the day before we brewed and I doubt I'll get to the end of the 21 days before I purchase. Seriously, this took the hassle out of all the in-depth calculations we would have had to make, and thought of things that we may have missed or had a harder time crunching the numbers on. There is a part of me that can see an argument for the purity of doing things oneself, but the Beersmith folks really have a slick product there and I'd advise it for any homebrewer who has questions about calculating mash volume, strike water temperature, brewery efficiency and myriad miscellany.

Our brew day started the way everyone's [should] - with a thorough cleaning and sanitizing. The cleaning on brew day wasn't as onerous as it might have been as we had soaked everything in Five Star's PBW solution the previous day. Now stop me if I'm being a predictable fanboy here (This just in: Man loves everything!) but PBW is the bomb! That stuff will clean whatever you want, I didn't really know how dirty my kettles were until after I'd soaked them for half an hour in that stuff. So we just needed to make sure our hoses, fermenters and wort chiller were treated and then give everything a healthy dose of Star San acid sanitizer (honestly I'm not a shill for these companies, I am just happy with how they make my brewing life easier. Much like the software, these products allow me to rest easy - and yet always remain vigilant! - and put extra care into my quality control and creative process).

So we were cleaned, sanitized and under way by around 12:30pm. I'm not sure if our burners are weak sauce, or if I'm just impatient but another lesson we had to learn was that we're likely to be looking at >1hr for most of our water heating. This isn't a problem when built into the initial steps, aka heating water to strike temperature in the Hot Liquor Tank (mine doesn't use an element like that pictured on the homebrewtalk wiki link - FYI: that's a great forum and indispensable knowledge-base), but when one doesn't decide to heat sparge water until 30 minutes into the mash that becomes problematic and a source of improvement for next time.  That being said, I don't think I'm disappointed with my Bayou Classics. Bringing 10+ gallons of any liquid to a boil is onerous and I feel that its not a chore (or too much of a propane cost) taking an hour or so to bring ~13.5gal sweet wort to a rolling boil.

But for a few timing mishaps this brew really went off without a hitch. Our mash in was perfect and we hit our temperatures pretty much bang on for the duration of the 1hr 17minute mash. There were a few bits and pieces that are best learned by doing but on the whole things were a smashing success. In addition it was fun beyond the brew itself to kind of be out in the community, albeit not by any intentional act of our own. The odd contraptions and inviting smell brought curious glances from passers by and a couple visits from intrigued neighbors and a bunch of fun conversation with new people. There's nothing like making alcohol on your driveway to draw attention.

Up until now I've been very bullish about things, and overall I still am. It was a ton of fun, a fair bit of work and we're going to get some good beer out of it (and better beer the more we do it - so folks keep room for a growler or two in your fridge). But the one aspect which we seemed the most unsure of was the sparge itself - the process of washing fermentables out of the spent grains. A lot of care must be taken in this step - the first couple of draws must be recirculated to clear the wort and compact the grain bed, that it might act as an auto-filter for particulate and various undesirables. Then one must lightly sprinkle heated sparge water through the grain to rinse the maximum amount of delicious fermentables into the boil kettle. This is to be done with the utmost care in order to avoid channeling and therefore washing through clearer water that takes with it fewer or no sugars.

We controlled the flow from our ball valves pretty well, and sprinkled judiciously with a perforated saucepan insert which seemed to distribute evenly. However, we ended up with a 10% drop in projected brewhouse efficiency, and missing our projected Original Gravity by about 0.006. Its a fairly minor quibble the first time around, but I think we can get better at sparge pacing, pH and Specific Gravity monitoring during the sparge to fulfill even our wildest dreams! In more spectacular news, our false bottoms performed spectacularly, we had no stuck mash and no noticeable hop particulate in our chiller and fermenters.

That brings me tidily on to my final product lauding of the post - the Therminator. In lieu of long-winded Bloviation on the subject, I think I can demur to a quick-witted paraphrase of everyone's favorite early 90's apocalyptic fantasy:

[the WORT had flowed into a carboy of shimmering glass]
Brewer: Is it chilled?
Therminator: Therminated.

Anthropomorphism aside, I will use understatement to make my point. The Therminator (and I'm willing to concede probably any other well utilized plate chiller) is a very efficient and empowering method of transferring boiled wort to fermenters exactly at yeast pitching temperature in a matter of minutes. If you are stuck employing an ice-water bath to cool to temperature for yeast fermenters - this product (or its non-hilariously named compatriots) will literally change your life. If you're using an immersion chiller, then it will improve your brew day by a measurable degree. And if you're already using a plate chiller (or maybe any counter-flow chiller) then you can wryly join me in my scintillatingly witty (and presumably original) incorporation of one of the BEST ACTION MOVIES EVER and our favorite way of cooling liquids.

To summarize - this brew day was a blast. Even the cleaning was fun. And out of it we've been blessed with ~9.5 gallons of what will be the evolution of our signature(?) Pistachio Porter. If you want to drink some, tell me and in about 30 days I'll make your dreams come true. 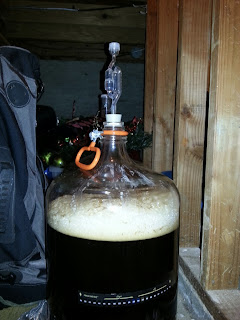 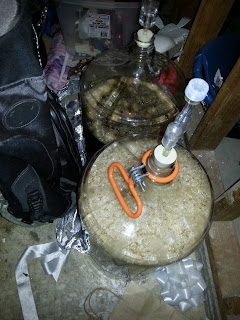