And now for something marginally different - Carpentry Edition.

As has been alluded to and flat out stated, we're building a kegerator! There's little sense in having these kegs filled with delicious beer if there's nowhere to keep them cool. And while it works, a picnic tap just gives a sub-par pouring experience on the whole.


So as was previously shared, we've got our chest freezer and temperature control in house and hooked up. We're dispensing happily from it with our two picnic taps and our gas lines. We've actually had all the gear to set up our keezer for some time. All of it except the wood for the collar. The collar is the real beauty of this endeavor. It gives us the headroom we need to fit that extra keg in, and gives us something less dramatic to drill holes in, and at the same time maintains the structural integrity of the freezer itself.

We have decided to go with 2"x8" Fir for our main structure, as this gives us a nice solid base without breaking the bank. Then for flair, we're going to cover that with an outside layer of 1"x12" oak, with a rich Red Mahogany stain. She's gonna be a beaut!


I was working alone today, so there weren't a ton of opportunities for 'at work' shots. But I tried my best to document each step.

There was a curious moment in the making of the butt joints where I thought I was blowing it. I was drilling guide holes for the main connecting wood screws (at the outside of the joint coming into the smaller side pieces) and twice in a row the screw went loose right after it got a little ways into the adjoining piece. The heads would just loll to one side and spin in a wide, sad arc that made me think the inside had rotted out or something weird like that. Instead what had been happening was the screws were hitting a particularly gnarly knot in the wood, which was so hardcore that the screws were snapping off due to the pressure I was putting on them and the resistance from the stronger segment of wood.

Once it was all screwed together and fitted on the freezer, it was time to make a judgement call - would I get heroic and finish it as far as the staining? We want the Oak to be brilliant, so we want to do miter joints for maximum greatness. I was using a chop saw, and so I felt like it might be worth a go. I measured up a few times and made my marks and set the saw to a 45° angle then paused. In cutting the 8" wide Fir, the saw was not quite large enough to make the cut in one stroke, I had to flip the piece to get all the way through. Needless to say, this just about sufficed for 8" on a butt joint and so I couldn't fathom of a way to make it work mitering a 12" wide piece of Oak. Maybe there is one, but quite frankly I wasn't in a position to figure that out.

Next up, the circular saw! It happily had capacity to make 45° cuts, and was hand-held for extra ability to cut through 12" of luxurious Oak. And this brings us to the lesson portion of our time together ladies and gentlemen, boys and girls. The maxim is to measure twice, and cut once and its a good one, but why not go one better? In this instance I went by the rule of measure twice, cut twice. And boy-howdy did it save my skin. I decided I'd take the circular saw to a bit of scrap wood we had laying around to make sure it would work as intended. Sadly my steady hand wasn't so good with a hand-held and the wood I cut deigned to start smoking halfway through. Although if I had done my first cut on the Oak it would have been a much less happy occasion.

Down tools. It was time to relax, not worry and have a homebrew. I immediately admitted defeat. The mantra of this failure (if it could indeed be classified as such) is: "We need to do it right, not right now."

So the collar isn't ready to stain, and the tap holes aren't drilled. But my limits are happily in check and a not insignificant amount of the work was done. The Fir fits, and I played around with the taps on some scrap wood. This thing's going to rock!


If you look really close, you can see where I tried the mitering on that last photo, I used the same piece of scrap for that and for test-mounting the taps (the 7/8" spade bit worked a treat!). Another great day with useful lessons learned and another step closer to a magnificent beer delivery service. Hey, and the beer wasn't half bad either, the picnic taps still get it into my glass ;). 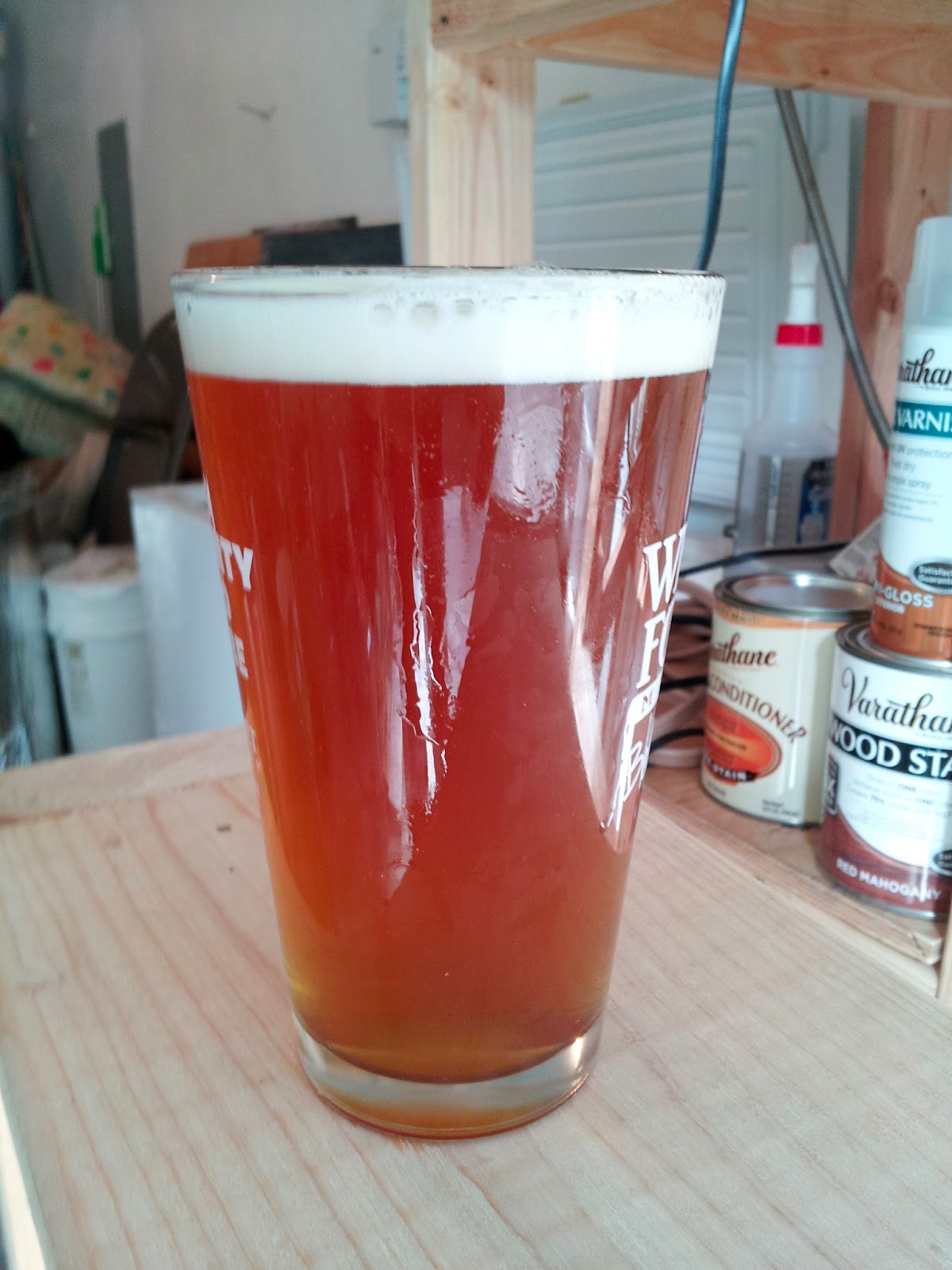