As a cautious beginner I wanted something in the way of hand holding for my first batch. But my intrepid sense of adventure wouldn't allow for just any cookie cutter step-by-step guide. As a brewer I've found myself reading all manner of instructional books, articles and forum posts (the first of many shout outs to Homebrew Talk). It is great to launch yourself into a new hobby obviously, and thanks to the likes of Charlie Papazian, John Palmer and myriad other pioneers and associations there's an embarrassment of riches for the new homebrewer to draw from.

I had previously skimmed parts of The Complete Joy of Homebrewing Vol. 3, Papazian's legendary tome, a few years ago, following a misguided attempt at a Victoria Bitter kit from my Local Homebrew Store. Now don't get me wrong here, I've nothing against homebrew kits; they are a great gateway for new brewers. But I was young. I was impatient and I was sloppy. I remember fondly hoping (in vain it turned out) that my mother's stock pot would have enough capacity for our boil. I remember how cavalier we were about cleanliness and near ignorant we were about sanitation. We did it though, me and my mate Pete made 'our' beer. It didn't matter at the time that we oxygenated the inoculated wort or that we primed each bottle with a dry and very roughly estimated teaspoon of regular white sugar. It was fun, it was new, it was 5 gallons of beer all for ourselves!

It turned out pretty OK. I remember thinking it was the best ever, but in truth it was exactly the sum of its parts. You could say it was the results of a beer kit put together by amateurs without proper regard to procedure. But in truth it was something more, it was a harbinger of things to come, an early warning of an all consuming passion. In many ways, it was destiny. I don't really remember how it tasted, and I've still never had a real VB. Perhaps I never should... 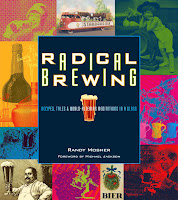 Notwithstanding these digressions, in stepped Randy Mosher and Radical Brewing in the form of a timely anniversary gift. Mosher puts an interesting slant on brewing, with an engaging brief history laden with off-beat facts and a daringly atypical recipe list incorporating unconventional and exotic ingredients such as habanero peppers,  chai, cardamom and henbane. More important for my needs at that juncture however, was the style of the first timer's guide it contained. Entitled "Your First Radical Brew", Mosher gives the novice a helping hand, but wide margins within which to work. Instead of an ironclad recipe, you get a ranges of ingredient amounts and the freedom to toy in between the lines to create your first golden/dark American ale.

Mine ended up something of a dark porter. I felt like going all out on dark ingredients and plumped for 6.6lb Thomas Cooper's Dark Liquid Malt Extract, added after steeping 12oz Crystal Malt 135-160 Lovibond up to 200°F. I also decided to get local and hop it up with 8oz of 8.8% Alpha Acid Cascade hops added in quantities of 1/4 at 60 minutes, 1/4 at 20 minutes and 1/2 at the end of the boil. A direct pitch Wyeast activator was used to inoculate the wort once temperature was between 70-80°F. Cooling time was and remains one of the more contentious parts of my brew days (until the impending purchase of an appropriate heat exchange device is made) and my process is pretty much an ice bath. This method is both frustratingly slow and a contamination risk. I am looking forward to adding some form of wort chiller to my set up at the nearest convenience. The yeast was pitched at room temperature onto a wort of 1.040 gravity, giving it ample opportunity to produce a tasty and mid-range alcoholic dark ale.

My first brew was a great experience, and I enjoyed taking on what I then perceived as the ultimate nuts and bolts of brewing so soon after deciding it would be a cool thing to get into. I revelled in the timing, the method and the thoroughness of sanitizing (all my gear was new so it was just a case of a quick rinse and then a soak in my newly-acquired one-step sanitizer). It all seemed so involved and in a real sense a daunting exercise full of imperative steps that I would eventually learn (the hard way) to find ways not to omit.

A somewhat humorous incident occurred during gravity testing to assess the end of fermentation. On 2/5/2012 and 2/6/2012 I got steady readings of 1.009, indicating the end of fermentation. Unfortunately prior to my third, and to be final reading - 2/7/2012, I made the error of resting my hydrometer horizontally on the counter. Either the hydrometer came alive or the rumors of my counter-top's level have been greatly exaggerated as it deigned to roll off onto the ground and break in half. I was stricken, how could this have gone so wrong? After some agonizing (where does one acquire a new hydrometer at 9pm on a Tuesday?), I employed the time tested Papazian mantra. I relaxed, didn't worry and had... well not a homebrew as Papazian so rightly suggests, but the only thing on hand; presumably one of the plentiful and incomparable craft ales of the Pacific Northwest. This was after all my first batch. The next day another hydrometer was procured, and I don't know if hydrometers vary in their accuracy but this one read 1.011 as of 2/8/2012. I chalked it up to experience, assuming that as long as I was measuring on the same instrument, all that mattered was the difference between OG and FG. As long as I didn't break this new hydrometer, things should be fine. It was the first of many lesson's I have learned, and I know there will continue to be more and more as long as I care to go on creating the great libation.

I primed the whole batch with 3/4 cup of corn sugar dissolved in 1 US pint of water and bottled on 2/11/2012. I projected the ABV at 4.07%, which in retrospect seems remarkably specific considering how many things went awry. After a patient 10 day wait, I tasted on 2/22/12. This gave way to another hilarious mistake. When bottling we ended up with one overspill, half-full 22oz bottle. This being non-standard, we decided to leave this one in the fridge. Needless to say,  I learned a lot about yeast inhibition at lower temperatures that month. After a few minutes panic that conditioning had been a complete failure I relaxed, didn't worry and cracked open one of the bottles that had been fermenting in the closet. The satisfying release of CO2 upon removing the cap was all I needed to know this had been a success. It was dark, rich and if a little over-carbonated and diacetyl laden (lending a sweet butterscotch overtone), an otherwise excellent stab at a porter style, which would inform my next batch and give weight to my original recipe intention.

Friends and family loved it and were intrigued. Perhaps this was partly because of the identity crisis it had; it was pretty hoppy and carbonated for a porter. But it was fun and encouraging and everyone wanted more. And perhaps most importantly, I knew I could do better.